Simply saying thank you doesn’t seem enough in certain situations. I was considering this while working as a ___41___ just a few weeks ago. And it came to me then how much easier it would be if we had a range of words that express different ___42___ of gratitude (感谢).

I can’t thank you enough

It is a pity saying thank you does not come in grades so that everyone understands the protocol,writes Jo Harper.

Simply saying thank you doesn't seem enough in certain situations. I was pondering this while working on the recovery ward just a few weeks ago.

One of the surgeons was explaining to a patient the results of a knee arthroscopy. The patient nodded and seemed to understand everything.

Then there was an awkward interval when the surgeon had finished speaking but appeared to be waiting for something. He was like a hotel porter hanging on for a tip. Finally the patient realised what was expected of him and thanked the surgeon profusely for all he had done. The surgeon took his leave, satisfied that normal Doctor/Patient protocol had been maintained.

And it came to me then how much easier it would be if we had a range of words that express different grades of gratitude. Thank you' is the same expression, whether we say it to the shop  assistant who packs our bags or the heart sur-geon who successfully replaces diseased valves.

My thoughts were soon put to the test. We had a woman on the ward who was recovering from knee replacement operation. One aftemoon, while attempting to get into she collapsed from what was eventually discovered to be a myocardial infarction. The collapse was dramatic, requiring the emergency medical team, crash trolley and good teamwork. But she recovered, albeit slowly, and was ready for discharge after four weeks.

She was grateful for everything that the medical and nursing team had done for her and was fulsome in her praise for the NHS. On her day of discharge, we shared in her delight at her recovery. As she was leaving she was keen to say goodbye to each nurse individually. When she reached one nurse, she tried to press a five-pound note  into her hand. My colleaque refused to accept it, saying that we were all just doing our job.The patient looked mystified, and then replied: 'Oh this isn't' for the care had. take that as given.No, this is for setting my hair yesterday.

And there you have it. To many people, saving lives is part of the job but styling hair is an extra and should be rewarded. That is probably what the patient with the arthroscopy thought-that it was simply part of the service and any expression of gratitude would have been pointless.

Jo Harper is an agency nurse 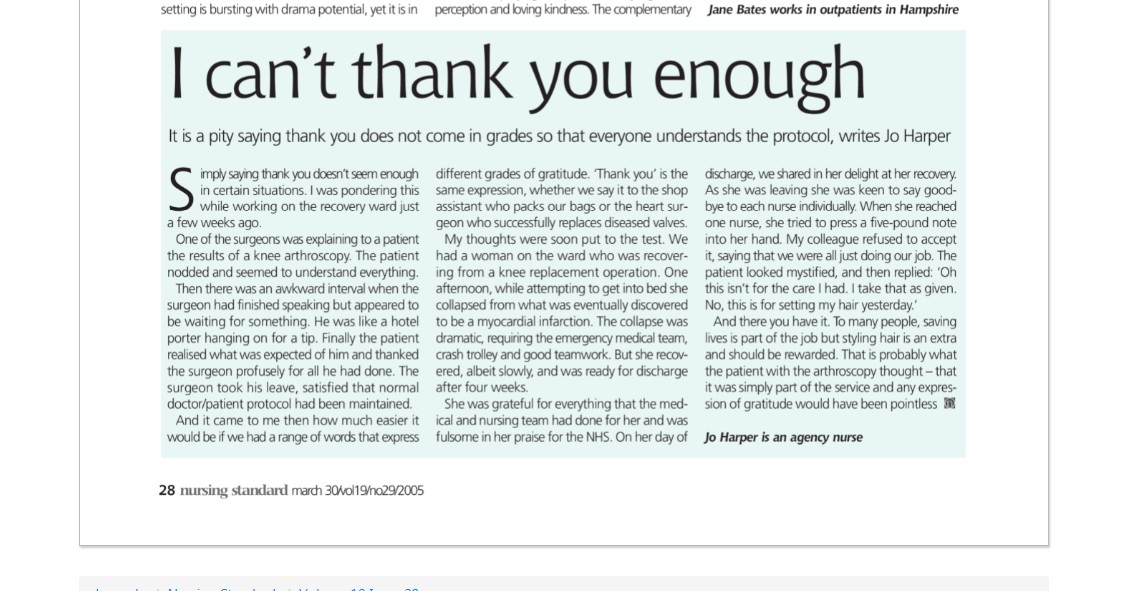